THE RHYTHM OF THE ALPS IS EVERYWHERE ... in ladders, milkcans, spoons and more ...

Impressions of the first rehearsal days and the first shows at the Germany Pavilion @ DISNEY EPCOT CENTER, Florida

THESE DRUMMERS ROCK THE ALPS... 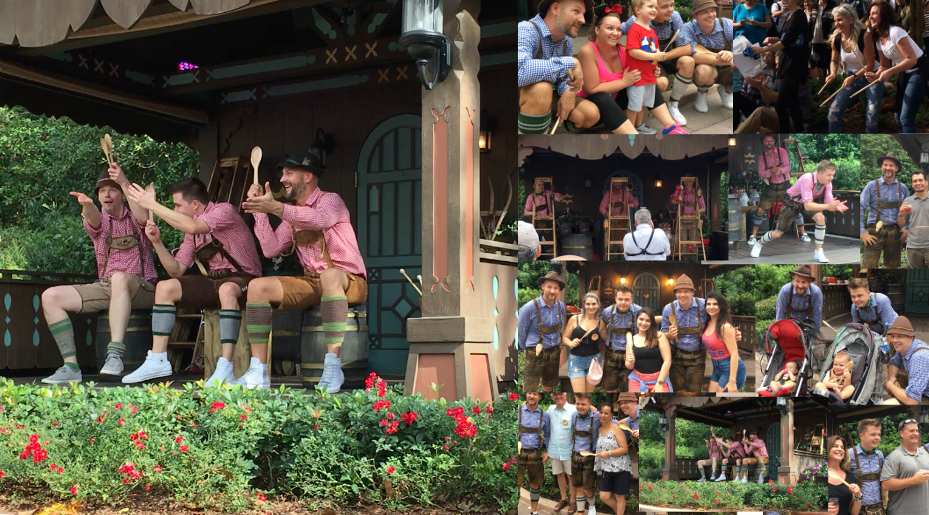 Tradition must never die! With an astonishing variety of tradititional instruments and song repertoire the Bavarian folk music represents a deep tradition within the cultural landscape of Germany. Bavarian culture is more than just the OKTOBERFEST, the world's largest Volksfest. It is a deeply rooted tradition of music, costumes and way of life. This tradition should be maintained by the young generation!

But why not bring some special and unique aspects to it?

The producers of GROOVIN´ALPS have pulled together some excellent drummers to bring bavarian folk in a very entertaining way on stage. Within this show they are combining traditional bavarian folk music, some special bavarian technics like the famous Loeffeln - a kind of German catanets - with the entertaining elements of well known drum shows in Germany, like POWER! PERCUSSION or ALPIN DRUMS.

Stephan Wildfeuer - composer and director of GROOVIN´ALPS - already established how unconventional and witty percussion music can be “staged” when founding POWER! PERCUSSION in 1997 as producer and performer. This has not changed even after hundreds of performances – neither has their audiences enthusiasm right through all age groups.

Beside European concert tours POWER!PERCUSSION have also successfully performed in Asia. After a performance at the Salzburger Festspiele in Austria they were invited to present their show at the Grand National Theatre Beijing in China. Other highlights were performances at the renowned Seoul Drum Festival in South Korea and the New Taipeh Festival in Taiwan.

With GROOVIN´ALPS Stephan Wildfeuer brings now on stage the bavarian interpretation of his proven POWER! PERCUSSION concept, by involving traditional bavarian folk music and the "groovin´tools" of alpin dairymen (Senner) to put together a traditional but entertaining bavarian drum show. He has choosen a specific character for each of the musicians. The smart, the vigorous and the funny one... And as the three wonderful drummers below have been invited several time to perform with other Oktoberfest music groups as well internationally, e.g. during festivals in Shanghai, they are very familiar with the bavarian way of let groove the music...

As an interactive highlight for the audience the producers preview as well a drumsession in front of the stage, where some typical Bavarian "instruments" like buckets, barrels, cowbells, spoons and milkcans are ready to be played by the guests (children and adults), instructed by the musicians on stage.